Helpful Share. Tiff wrote a review Feb Historic and Scenic. The first thing you'll see is a gift shop and museum, which has a ton of information about the local wildlife and history of the site.

Behind the museum, there are 3 hiking trails, which have the miles listed on the signs. The views are amazing and the ruins are fascinating.

Date of experience: January Montvale, New Jersey contributions helpful votes. Awesome Views. This spot is a great stop off for some spectacular views.

A quick hike from the parking lot is very manageable. Too bad you cannot get all the way down. Well worth it.

This is a free park with camping and picnic tables as well as a visitor center and cliff dwellings. Rangers lead long hikes down to the dwellings.

You can take a short walk on platforms to a view point above where you can see the cliff dwellings in a distance.

It is neat but I …. Date of experience: October The canyon may have been lush and riparian when the Anasazi flourished here. The last part of the hike is on a bench above the canyon bottom.

There are some ups and downs plus a lot of loose sand making for somewhat unpleasant walking. Keet Seel is in a great alcove situated in a small side canyon, actually more an indentation, and faces south as most cliff dwellings do.

There is a spring in this area and hence an oasis. There are grasses growing in the fields which were apparently once farmed by the Anasazi.

Closer to the wall are large trees with ideally placed picnic tables for lunch. A resident ranger lives in an adjacent Hogan Navajo-style building and leads the tours of the ruin.

The ranger, a young woman named Marcie Photo, below , took the two of us on our own personalized tour of Keet Seel, which lasted about an hour and a half.

The cliff dwelling sat in the alcove which was about thirty feet above the canyon bottom. Access to the alcove was by a ladder. There were piles of potsherds broken pieces of ancient pottery lying all over the ground.

They included numerous large pieces; one piece was about six inches long. The variety of pottery design was amazing. They included braiding, multi-coloring, and intricate designs.

Some pieces were painted on both inside and outside. Some still had handles attached. Many pieces had a polished, shellac-like finish to them.

The volume of potsherds within the alcove was also tremendous. The park service was kind enough to leave a couple of nearly intact pots on one of the rooftops.

There were a couple of boxes containing jewelry pieces, arrowheads, cutting edges, and every sort of small artifact.

There were corn cobs lying around everywhere, as well as stems from squashes. One room had a gigantic pile of corncobs. Many of the rooms still had their original roofs intact including the outer layer of plaster.

There was much more walkway space here than at Betatakin. However the masonry was more haphazard. The walls seem to have been of lower quality, and the layout had a more thrown-together look.

The site looked like it was abandoned a lot more recently than years ago. The limited visitation policy perhaps has something to do with it.

More people probably see the major ruins at Mesa Verde in a day than see Keet Seel in a year. I drew her out and got her to talk extensively about herself and her way of life.

She grew up in North Dakota and has been accustomed to a rural, outdoor lifestyle all her life. As a seasonal ranger she is unemployed several months a year.

Given the rather low pay of rangers to begin with, this must lead to a less than materialistic lifestyle. It is easy to respect a person like Ranger Marcie who practices what she preaches: to live the rural, outdoor life at the expense of material comfort and security.

The Keet Seel tour ranger has perhaps the ultimate outdoor situation, living in the canyon miles from civilization. It is the task most desired by the rangers at the monument.

Each ranger takes a turn at an eight day stint as tour guide at Keet Seel. He gave a very descriptive account of the Anasazi people and how they used to live.

He showed us where they grew their crops and ground their corn. There are even remnants of coal and corn cobs from years ago left untouched.

He showed us the sleeping and the garbage areas and the footholds they used to climb up the side of the cliff. Kayto told us these are the best preserved ruins because they were built underneath an alcove so they are protected from rain.

Kayto also took us to an area on the cliff walls where pictographs were drawn. You will be able to get a close look at the ruins. Nothing is fenced off so please respect the rules.

Because it is a canyon, you will be going down in the beginning so remember to reserve some water for the way back up.

It is an easy decline for about the first mile but the grade becomes steeper after that. The trail description says strenuous, steep switchbacks and it is strongly discouraged for anyone with health problems; good physical condition is necessary.

At least two liters of water is recommended, as well as snack and comfortable hiking shoes. We followed Kayto down at a relatively fast pace passing juniper trees along the way.

Once at the bottom we walked through a forest. There are very clean outhouses several yards away from the ruins. They were built far enough away and, with plenty of cover from the trees, they are hidden from view.

After the tour you are allowed to return to the top at your own pace. The guide is always the last one out. Be warned there is some poison oak near the pictographs and mosquitoes in the woods at the bottom.

Check out the Official Route and Triplogs. Availabilty: 25 tickets are given out on a first-come, first-serve basis the morning of the walk.

Betatakin meaning ledge house is a large cluster of well-preserved cliff dwellings thought to have been inhabited by the Anasazi during the latter s.

Betatakin is visible from an overlook on the Sandal Trail, but one ranger-led tour into the ruin itself is given each day in the the summer season A second tour may be offered at am if enough people are interested.

The Visitor Center opens at a. Mountain Daylight time ; tickets are given out on a first-come first-serve basis. The hike from the Betatakin trailhead is five miles round trip and is strenuous with steep switchbacks.

The Betatakin tour is strongly discouraged for anyone with health problems; good physical condition is necessary. At least two liters of water are recommended, as well as a snack and comfortable hiking shoes.

The tour begins at approximately a. Reservations are not accepted, so arrive early. It has been determined through data gathered at the ruins of Betatakin and Keet Seel that these particular sites were occupied by the Anasazi during the latter s.

The Anasazi, in general, are thought by anthropologists to have originally descended from nomadic Paleoindians who hunted game and lived upon the mesas.

The Anasazi are classified in two categories: the Basketmaker and Pueblo. The Basketmaker period lasted until AD, so named for the fine baskets they crafted.

The Basketmaker people traveled frequently, storing game that was often hunted with the atladle or spear-thrower. As they became familiar with agriculture they depended more on corn and squash, settling near fields and building pithouses into the ground.

The Basketmakers utilized the yucca plant's fibers for crafting sandals, strings and rope. As the food supply from farming became more dependable, the people gathered together in more permanent communities.

Buildings began to evolve above ground level, first for storage, and then as living space. The alcoves such as those seen at Betatakin and Keet Seel provided shelter, and the canyons offered springs and fields.

Elaborate pottery was crafted during the Kayenta Pueblo period, often thought to be the most beautiful and creative of Anasazi ceramics.

Some ruin walls were built with the jacal method, thick sticks standing upright and covered with plaster. 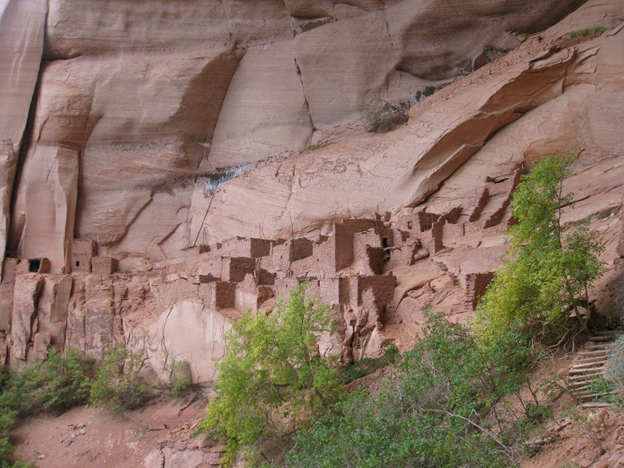